continuing on with my rabid obsession with Rodin.

[The intertwined figures ensure that this piece is aesthetically pleasing from all angles. Rodin noted that he chose to keep the figures nude so that nothing could interfere with the raw emotion that he wanted the viewer to feel immediately.

As with many of Rodin’s sculptures The Kiss is designed to be viewed from every angle and Rodin wanted the piece to be believable and real. The artist certainly creates this and by making a sculpture which is visually stimulating from 360 degrees, his dedication and skill is obvious. The contrast between the smooth skin of the lovers and the rough marble of the rock they are sitting on adds further sensual elements to this piece.

The passion and romance of The Kiss is undeniable; the figures are so involved in one another that their faces are barely visible. The embrace with which they hold each other makes the tragedy of their love even greater and Rodin draws on themes which all audiences can appreciate in a way which is both romantic and sensual. Although both figures are nude, Rodin’s skill as an artist ensured that the way the figures were rendered was not overtly sexual.]

The text I bolded explain precisely why this sculpture is effecting. I saw it for the first time on some sort of TVO documentary and it struck me as the most realistically rendered “romantic” sculpture I’d ever seen. I was only in freshman in high school and had no idea it was based on Dante‘s Inferno. In a way, I’m almost sad it depicts a scene that ends so bloodily. I wanted to preserve the innocence, at least in my head.

For your viewing pleasure (ha! sorry, I am defenceless against puns), here are several different perspectives of The Kiss: 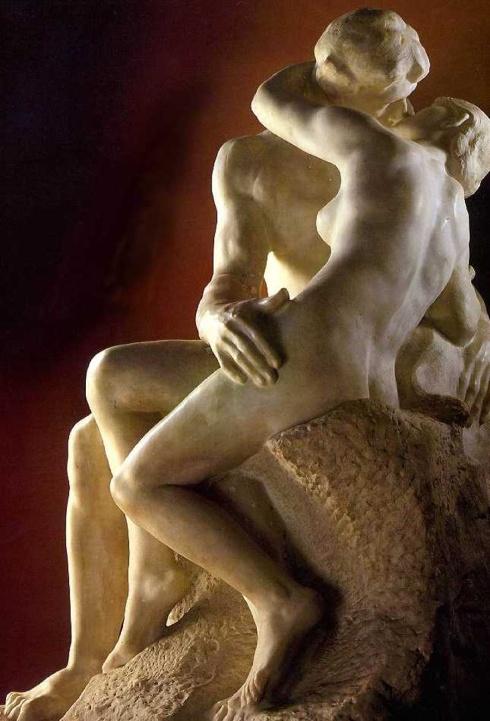 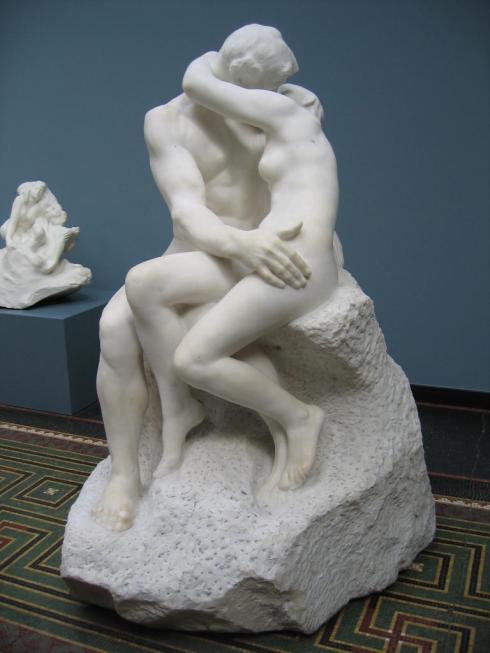 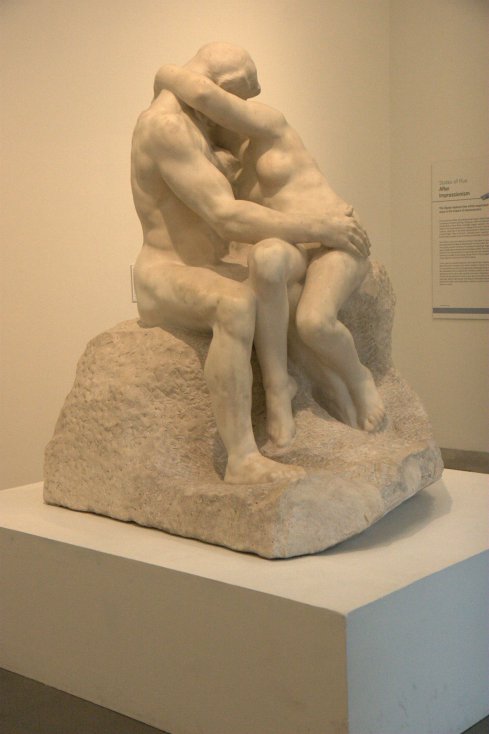 I had been anticipating my visit to the AGO to see the Picasso exhibit (150 +paintings and sculptures from his private collection) ever since I saw its adverts all over the city. Throughout middle school and high school, I basically thought his art was weird and incomprehensible. Now, I don’t think this is a controversial statement to make – most people consider non-realistic art “modern”, which translates into odd in casual speech (IMO). I had studied him in an art history course and still, he remains an enigmatic, almost larger than life character. Picasso himself loved the mysterious nature of his work. He encouraged the notion that his pieces did not obviously express or imply a particular message.

Suffice to say, I was a little apprehensive – but more importantly, I was excited. I’d seen a few of his originals in various museums in Boston and NYC (the MET) – but never had the chance to actually study the paintings (the downside of being in a tour). This could be the day I gain a firmer grasp of his art, his style, his culture.

I had secured a pair of tickets for Wednesday night (half price) and happily synced the audio commentary freely available on the museum’s site. SO after an eight hour day at work, I wolfed down half a cheeseburger leftover from lunch and got myself downtown to join a chum who also hadn’t experienced much live Picasso and was equally interested in the initiation. We met on the steps and skipped the giant queue (having paid before hand) of people who were there for the same show.

I was giddy, practically bouncing on the balls on my feet. After declining a pair of headphones (for the low low charge of $6), we entered the exhibit through a red corridor lined with photos of Picasso and his family. And then we were there:

Beginning with Exhibit Room 1 – it contained some of his early works. Celestina (trans: The Woman With One Eye) caught my eye (pun intended) from the get-go. It’s evidently from his blue period and is a somber, if not slightly terrifying portrait of a lady Picasso knew. 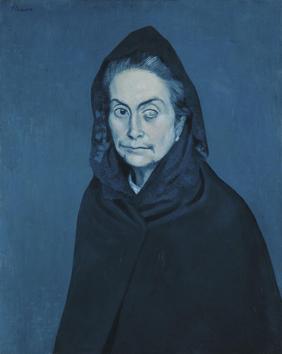 Her working eye is steadily watchful, and unnerving to say the least.
Image Credit: http://www2.richmond.com/mgmedia/image/0/354/129679/picassos-personal-collection-at-the-vmfa/

Scholars in the audio accompaniment quote Picasso as being unconcerned with how his art was interpreted. For instance: 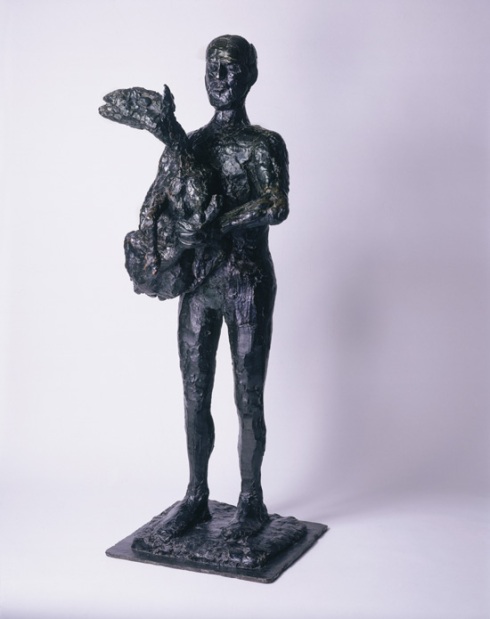 Many scholars thought this sculpture was one of Picasso’s happier pieces because they believe the sheep is representative of the harvest season (and thus, good times). BUT Picasso apparently retorted (paraphrased) “it could’ve been any animal, there was no statement at all!”

Personally, I’m a little baffled at Picasso’s reaction. While I appreciate his desire to leave things “free to interpretation” – to devoid this piece of any meaning seems a little… thoughtless? Why did he chose to render a sheep? What was it about the sheep that made it more attractive as a subject? I suppose I like to base my readings on evidence, not on whim.

Anyway –  Portrait of Dora Marr must be one of my favorite paintings by Picasso. It’s painted in that curious in-between state. The chair and the body have mostly been broken down into 2-D shapes – but the picture is positively alive. Dora is luminous and her glaze – spell-binding. The way her face is presented seems to suggest that this picture is both candid and posed. Dora’s got one eye trained on the viewer, and the other, seems utterly non-nonchalant. 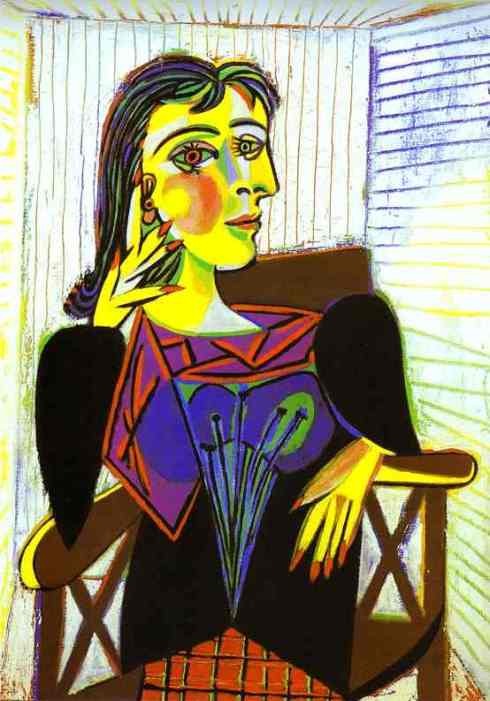 More to come later this week~