How was everyone’s Christmas? Sorry I’ve been MIA, after my exams ended, I have been working everyday since Christmas Eve. I spent the 3 days been my last exam and work by watching films (was totally disappointed with Anna Karenina, and have mixed feelings about The Hobbit), skyping with my mom, and meeting with friends. I went shopping on Boxing day after work – and came home empty-handed. This is the norm for me, but I was so looking forward to buying a little something. The things I really wanted did not go on sale, and the things I didn’t care for were 50% off.

I am munching on a KFC sandwich right now. The meat is tough but it somewhat satisfies my craving for fried chicken.

I was supposed to get through my Aristotle readings, but I barely made a dent. I feel terrible for slacking off, but after 8.5 hours of work and trekking through all the slush and snow, I end up passing out on my bed. I did finish one of the novels for my CAN LIT class though. I’m starting on Margret Atwood’s ‘Alias Grace‘. I can’t say I’m absorbed, and I was never a huge fan of her writing – but hopefully, the story gets better.

I need to write more!! I have a ton of deadlines coming up and I don’t even have drafts for some of them. URGHH

I also need to reread those plays for my second semester of Shakespeare. I still have to meet up with people after New Years and it’s cutting into my prep time – but what can I do? Friends are important, and I need to loosen up a bit, too.

I went to see Frida last night. The museum is CRAZY crowded. It was a members only night, so I assumed it’d be dead – but I guess not. Sigh, I’d better go during the day time.

All my moaning and complaints about not having enough hours in a day are biased, I’ve been obsessed with this Korean drama called School 2013. It’s a refreshingly realistic (though occasionally exaggerated for dramatic effect) look at the Korean education system. I won’t fangirl about it here, but ARGH!!! One word: BROMANCE!

Meanwhile, I’ve been listening to a lot of jazz. It’s mostly Holiday themed – but still lovely. Do any of you use Songza? It takes me a while to find a playlist that is compatible with my taste, but it’s still pretty great!

I’ve been meaning to write-up an entry on my recent cooking experiments. So here:

These little darlings are delicious! I didn’t people ate chicken ribs – it simply isn’t offered at restaurants (except KFC, but they call it differently). I like to foil line my pans so I don’t have to scrub them to death later. I drizzle some EVO on the bottom, season the ribs, cover pan with foil and bake for 15min … and DONE!

SO EASY! I made a simply cucumber and tomato salad to balance out the protein.

all juicy and whatnot 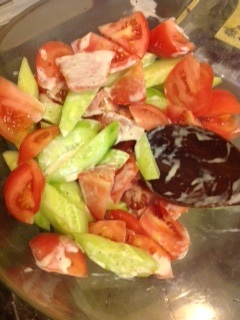 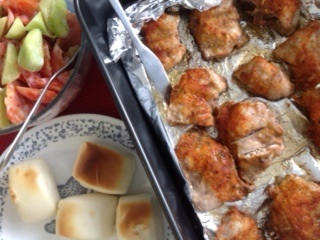 My Dad loves meat – so whenever he sees it on sale, he buys it and packs it in our freezer. I, of course, am handed the task of thinking up ways to cook the damn things. The problem is they are never pre-cut. In this case, I’m left with this giant slab of pork sirloin:

massive – i think it was 7lbs at least

Anyway, I left it to thaw for a couple hours and then rubbed a bunch of spices all over it (I’m always highly suspicious of “seasoned” raw meat) and left it to sit for a while more. I lined the pan as is my usual practice but didn’t use any EVO – pork is pretty fatty as a meat, so I didn’t see the need to make it any worse.

Making sure to turn the meat over at the half way point so it cooks evenly:

next up: Simple Guacamole and Very Berry Pineapple Fro-Yo Shake

*All of the above images are my own.