I have convinced myself that Sherlock would make an excellent subject for my linguistic anthropology paper. So i went ahead and did it – when i get it back, I shall post portions of it~

I keep getting distracted, of course. I was watching the A&E doc on Elvis the other night and it reminded a question someone asked me after browsing my playlists.

“What’s so great about Elvis?”

YMMV, but I almost treat these questions as rhetorical ones. It’s like asking why MJ is the King of Pop. These titans of pop culture – either you like them or you don’t.* When I listen to or watch these kinds of people, I am overwhelmed not only by their talent, but by their charisma. I fall under a sort of spell that makes me even giddier and more intense (if possible) than I normally am.

* I’m a hypocrite, because for the past year, i have been educating myself on Beatles’ music. And you know what? It’s working.

the round headed wonder

I was listening to one of my audio regulars when I realized Karl Pilkington is one of the obsessions I haven’t made remarks upon. It’s difficult to qualify him. He isn’t a comedian but he’s the funniest person I know. He isn’t educated but his observations make you stop and wonder why you haven’t thought of them before. He’s an enigma, and he has no clue why people are fascinated with him. It’s precisely this unconcerned, “un-celebratized” air that he has (seriously, he’s for real) that endears him to all his fans. Heck, he makes the current Ricky Gervais (one of his best pals) tolerable (when they are together)

My obsession started when I was searching for “english podcasts” on itunes. There were a ton of results, ranging from the Stephen Fry ones (which, of course, I already possessed) to grammar ones and, most importantly, this.

Now, you know I can’t turn down anything that has to do with the English – and seeing its outrageous high rating/popularity didn’t hurt. So I clicked – anticipating a quirky discussion on why the English are awesome. incredibly enough (and luckily enough) I had no idea that these were comedic podcasts – the description (from Audible) was  cute and whimsical:

The Ricky Gervais Guide to… THE ENGLISH.

In celebration of St. George’s Day, this last episode in the present series focuses on the English – their culture, history, and how they are perceived internationally.

Join Ricky Gervais, Steve Merchant, and Karl Pilkington as they take tea, maintain a stiff upper lip and generally comport themselves as fine examples of the Bulldog Breed.

For your listening pleasure: http://www.guardian.co.uk/culture/audio/2010/apr/23/ricky-gervais-podcast

So I listened. I was pretty confused why Ricky was so hostile towards this Karl dude (esp the infamous ORANGE HEAD intro), who seemed pretty laid back and was just taking all this crap. Maybe it’s because I am also somewhat of a self-professed weirdo, but I was sort of nodding my head with some of the stuff Karl was saying. Anyway, by the end, I was hooked – and I started to listen to Season One of the show (the guides happened after 5 seasons) – those were even better – my favorite segment till now has always been “KARL PILKINGTON’S DIARY”. It’s the combination of the funniest non-happenings, Steve’s dead-pan delivery, and Ricky’s screams of laughter that makes it hilarious.

As is per my habit, I devoured the podcasts in less than a week and began scouring for more. It wasn’t until I found the XFM (a London alternative music radio station) shows that I became a devotee. These are recordings of this weekly radio show that Ricky did immediately following the first season of The Office (oh, Tim). Karl was the producer (responsible for “pressin’ the buttons an- that”) and wasn’t even suppose to be on-air. But over time, Ricky became obsessed with Karl’s strange and fantastic outlook on life and began to drag him into the on-air conversations. The rest, of course, is history.

Most fans agree that the latter half of XFM Show 1 and the first half of XFM Show 2 are the funniest things they’ve ever heard. I have loved them for 2 years now and though I know every episode like the back of hand, they never fail to cheer me up.

It’s difficult to find just one clip to represent the trio is so amazing, so I am going to be self-indulgent and pick a few of the classics:

The Worst Christmas Ever!

And we end with the Man himself: http://www.youtube.com/watch?v=zz0DKtWl-Eo

How about you guys? Any favorites?

After a needless but painful kerfuffle, I made my way to the local cinema to watch an encore screening of Frankenstein, a National Theater (UK) production directed by Danny Boyles (of Slumdog Millionaire fame) and led by Benedict Cumberbatch and Jonny Lee Miller.I was not a great fan of the original novel Mary Shelley (published in 1818). I think I was too young, maybe pre-teens, and the story horrified me. Thus, I was a little apprehensive going into this theatrical revival.

One of the things that contributed to the play’s successful run in 2011 was that Benedict and Jonny actually alternated the roles of Victor and the Monster every other night. But the Monster is, without a doubt, the meatier role of the two. In this production, we don’t actually meet Frankenstein by name until 40 minutes into the play. Nonetheless, my recent history of appreciation upon rediscovering initially “balked at” works urged me to give Frankenstein a second chance.  And the lure of Benedict Cumberbatch (who plays the Monster in this case) helped too – so there goes my twenty bucks. 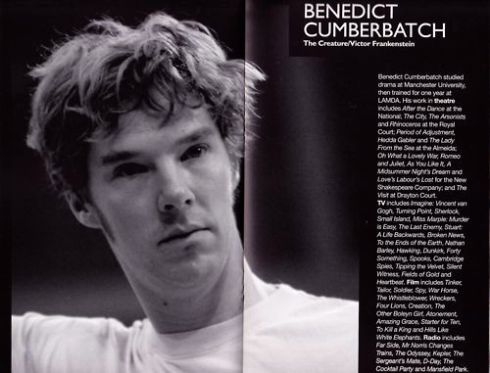 Thinking back, it was more than worth it.  SPOILERS GALORE BELOW

The show began with a brief overview of how the production came together: the writing, the casting (Benedict only wanted the part because of the reversed roles), the direction, the acting (both actors took movement classes to hone their interpretation of the Monster’s manner of moving. Jonny, for instance, said that he became an infant in his turn as the Monster.) 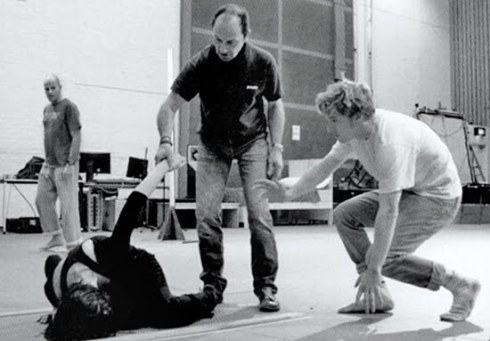 After the few words from the writer (Nick Dear) and the director, the screen dimmed.

First, we see a circling shot of what seem to be a huge cluster of stars – the lens zoom to show us they are in fact, countless twinkling light bulbs dangling from the ceiling, lighting the stage. 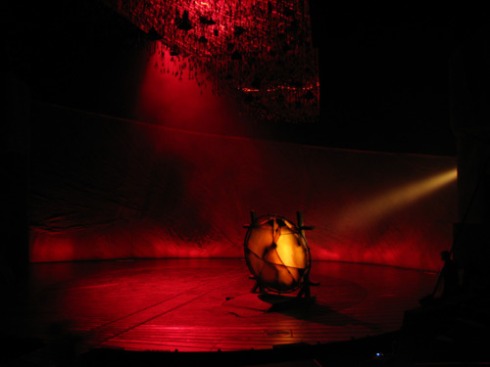 The stage is dark, safe for a strange upright womb-like sack. There is something within its semitransparent film and it’s pulsating with increasing intensity. After a good minute of struggle, the thing manages to get its legs out of the sack. An explosion of light from the ceiling signals another crack in the sack – and the thing, all contorted, slides onto the floor, trembling. This is our Monster. 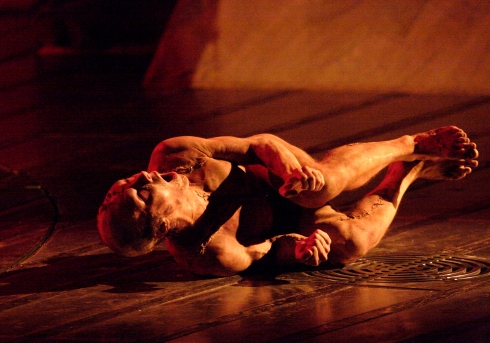 It’s a human shaped creature, with a bald head and crude surgical stitches inches long all over its body.  Its limbs flail, shaking like mad. At first, he (obvious by the loincloth) tries to crawl. But like a baby zebra, can’t muster the energy to hold his arms straight. He falls to the floor again and again with loud thuds and grimaces, and still, he cannot support his own body. After many attempts, he finally manages to lift himself up. From then on, the progress is quicker, and easier – eventually rising unsteadily but triumphantly to his feet. Within moments, the Monster is galloping in circles, howling with delight. 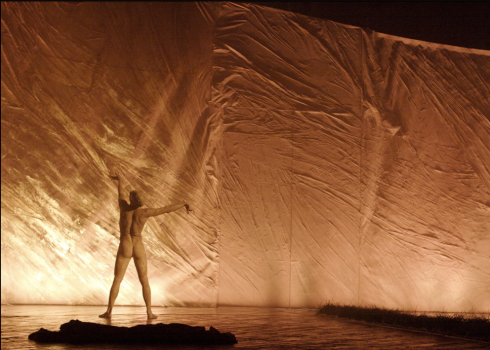 I’m sorry I can’t remember where I got this photo from – but it’s everywhere on tumblr.

a newcomer to Beyonce.

And I mean that in an intimate, more than glancing interest sort of way. I’d always admired her drive, her talent, and how she stays absolutely true to herself. I am in the midst of learning more about her music, her roots, and her influences.

I think now is an especially perfect time to immerse myself in her world. She’s made a incredible comeback after having her baby. I’m so excited to see how her style will evolve.

I may not be her biggest music fan (I have trouble loving some her belting ballads and hip-pop songs) but this woman is so strong and she’s definitely one of my heroes.